This week’s shooting of 3 young Muslims in Chapel Hill, North Carolina has not gotten all the media coverage it deserves.

There, I said it. But there’s nothing brilliant or brave about my statement. Thousands of people have taken to social media before me to express their frustration and indignation about how we – the media – have chosen to cover – or not – this story.

From conservative to liberal media, the unofficial “if it bleeds it leads” standard for news coverage hasn’t necessarily applied to this event. But from what I’ve read online and on multiple social media posts, people’s frustration has more to do with how this is being covered rather than with the amount of coverage. 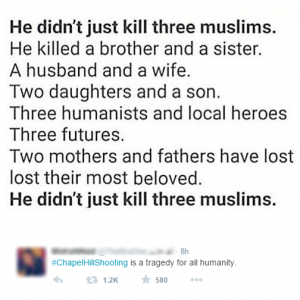 Quite honestly, working in news desensitizes you to a lot of things. When I read headlines I need to pick and choose what stories I will invest myself in because it can be mentally and emotionally draining. There’s just too much going on, so I need to be wise, but there are some issues we should all as humans be invested in. And this is one of those.

I initially read a headline that said “3 killed over a parking spot dispute in Chapel Hill,” and thought “I’ll read about it later.” Before I left work that day I heard someone mention it had been 3 Muslim students, and that piqued my curiosity. I looked up the story on different websites but there weren’t too many developments at the time. As with other shootings I was expecting to see a lot more coverage on every major news network, but that wasn’t the case. Though there was some coverage, Wednesday was a busy day in Washington D.C. and it seems all media outlets were all dwelling on President Obama’s request to Congress to use war power on the Islamic State.

I was a little peeved by the fact it wasn’t getting the same coverage that Trayvon Martin, Michael Brown or Eric Garner got. After all, these students were also young and a minority. But I still wasn’t really thinking about the motive of the shooting, until I checked my Facebook and saw a post from a Muslim friend: 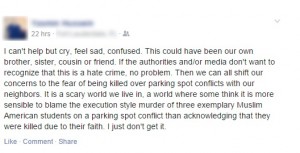 The words “This could have been our own brother, sister, cousin or friend” made me stop and literally catch my breath. At that moment I thought – “what if it had been one of my friends – whether Muslim, Christian or Jew?” Considering the current political and religious atmosphere around the world, would I have dismissed it as a simple parking lot dispute? Or would I also be questioning if faith was a motive?

Later that evening I had a conversation with a very good Muslim friend who doesn’t usually like to discuss political or controversial topics but he also brought up the fact that if the shooting had been committed by a Muslim, it would have quickly been labeled as terrorism, and news networks would be all over it. I agree.

Deah Shaddy Barakat, his wife Yusor Mohammad, and her sister, Razan Mohammad Abu-Salha were not in an altercation with police, they were not breaking the law and there have not even been allegations that they attacked or threatened their killer.  They were exemplary individuals working for a better future not only for themselves, but also for their community and for those affected by the conflict in Syria.  However, they were apparently killed execution style by Craig S. Hicks, an atheist neighbor that according to two of the victim’s fathers, had picked on them in the past. Hicks’ wife says she is very confident the shooting had nothing to do with their religious beliefs, but with a long-standing dispute her husband had with the neighbors.

Police have not given any other motive for the shooting either.  Anna Bigelow, an associate professor of Islamic Studies at N.C. State, told Religion News Service that police don’t know if it’s a hate crime yet, “but it’s irresponsible not to account for that possibility. The Muslim community has a legitimate reason to feel vulnerable and to have that vulnerability respected as part of their civil rights.” I also agree with Mrs. Begelow. Again, with the current global political and religious atmosphere, Christians, Jews and Muslims alike have the right to feel vulnerable.

Yes, we are facing major threats from radical Islam all over the world. That is fact that cannot be denied and it must be dealt with. But at this moment I’m extremely concerned with how we consciously and subconsciously ascribe different levels of importance to stories and events based on the race, religion, ethnicity, political affiliation and nationality of those involved. Media outlets may be able to hide behind the “limited amount of air time” we get. It’s a hypocritical excuse sometimes, but also a valid one other times.

But what’s our excuse as individuals? Especially when we like to say we believe in equality and justice for all? Let’s be honest – do our hearts truly break equally for everyone’s tragedies irrespective of race, creed or ethnicity? For most of us the answer is NO! It’s a sad truth, but one we can change if we make a more conscious effort to treat othesr as we would want to be treated. An effort to acknowledge that ALL LIVES MATTER.

I wish more Muslims would stand up for the thousands of Christians and minorities being persecuted by Muslim extremists in the Middle East. I also have to admit that as much as I admire King Abdullah II for his harsh response to ISIS’ brutal killing by burning of a Jordanian pilot, it really bothered me that Jordanians didn’t express the same outrage about all the other Western & Japanese prisoners that were previously beheaded by ISIS. It was clear it hit home for Jordanians that ISIS executed a fellow Muslim, but I can’t help but wonder if the response would have been the same if that pilot had been a Christian?

Even so, we cannot use other people’s apathy as an excuse for our own indifference.

As I thought about Deah, Yusor and Razan this week, and the pain their families and friends are enduring, I kept thinking about how as a Christian I am called “to act justly and love mercy.”  About how Jesus while He was here on earth stood up for everyone – remember the adulterous woman about to be stoned? I thought about the virtues of love mentioned in 1 Corinthians 13. Some of those virtues are that “love does not delight in evil” and “it always protects.”

We cannot claim to have God’s love if we are not willing to seek justice for all. Sometimes the best way to show justice is by loving others the way we desire to be loved. As Cornel West best said it, “justice is what love looks like in public.”

I can inundate your screen with hundreds of hash-tags about lives that matter – #MuslimLivesMatter #HispanicLivesMatter #BlackLivesMatter #WhiteLiveMatter #MixedRaceLivesMatter – but it should simply boil down to this: #AllLivesMatter

These widgets are displayed because you haven't added any widgets of your own yet. You can do so at Appearance > Widgets in the WordPress settings.

Theme by Anders Noren — Up ↑